Reviewed & edited by Lenny Terra -This blog is supported by its readers. If you purchase through links on our site, we may earn an affiliate commission. 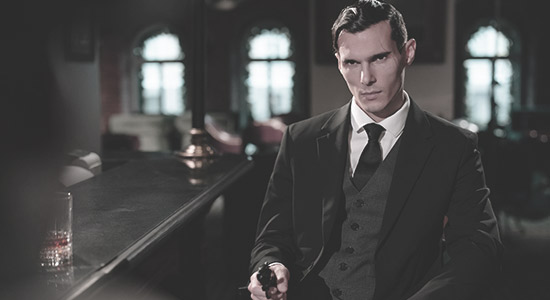 When people ask me how I get my style or know what looks good, I explain that it’s simple.

Just learn the basics of fashion, keep up with current trends, and watch many movies.

Movies are basically the greatest source of style inspiration you’ll ever find.

The men in movies are always dressed to impress, even if they’re dressed down or in jeans and a t-shirt.

They’re put together for every occasion, whether they’re at home watching tv or out at some club having fun with friends.

It doesn’t matter where you go; there will be someone who knows how to dress well and look good doing something amazing with his life (or girl).

That’s why these 10 manly movie characters made a list as some of the best-dressed men to live on the silver screen.

Their style is perfectly functional for their environment and utterly appropriate for any situation they might face – no matter how dangerous.

A man’s clothing doesn’t have to be complicated; you just need a few key pieces to bring together an outfit that will turn heads anywhere.

Here are some of those men:

Frank Martin was a simple car transporter who had a complicated life behind the scenes of his job where he got into all sorts of dangerous situations.

He had to kick ass, drive fast, negotiate tough deals and still look good doing it all.

Frank’s clothes are practically interchangeable in all three films because he looks just as great in casual clothes as he does in the tuxedo that showed up at his awful wedding.

His wardrobe is great because he stays away from complicated designs and patterns, sticking with timeless basics in any situation.

Frank doesn’t look like a bad guy in his clothing; he seems like someone who could be anyone, but he’d still kick your ass if you gave him trouble.

Manly-Style Inspiration: Take some advice from Frank Martin and always look your best, no matter the occasion.

Brad Pitt as Tyler Durden is one of those style icons that everyone wants to dress like, even though he’s a character from a movie.

Tyler showed up at the worst times and persuaded people to do terrible things to themselves – but hey, it looked great on camera.

Pitt wears many dark colors that stand out against the lighter color palettes that everyone else is wearing around him. His overalls don’t look ridiculous because they match his bomber jacket and have paint splatters all over them.

The flannels tied around his waist give him an edge because a belt holds them with a skull buckle (pure savage).

Even though he wears many dark colors that might blend into the crowd, Tyler still looks like someone worth noticing because there’s nothing ordinary about him at all.

Manly-Style Inspiration: Learn to stand out without being too loud or in your face about it.

John McClane is just another New York cop whose life took a turn for the worse when he had his Christmas party ruined by German terrorists sent overseas for corporate espionage against his client. Luckily, he survived through the night to save his wife and everyone else, but only because he wore an undershirt.

McClane is iconic because of how “rugged” he looks all the time. He’s typically seen in a dirty vest with shirts underneath that are just about ready to bust open at the seams. Even when he goes home to change at the end of each movie, he still looks like a badass cop.

His footwear consists of steel-toed boots for kicking criminals behinds, while his outfit is topped off with a cap that still manages to stay on during frantic action scenes.

John McClane might not care much about how he dresses (he couldn’t care less), but it doesn’t stop him from making some truly badass style statements without even trying hard at all.

Manly-Style Inspiration: Don’t wear an undershirt and expect something terrible not to happen.

Tony Stark was the highly successful CEO of his own company, but he still had issues with alcohol and depression, just like everyone else. When he was kidnapped in Afghanistan, he was forced to build his captor’s weapons for them in Iron Man 1, which meant that not only did they gain weapons, Tony Stark lost everything after revealing himself as Iron Man.

Tony always looks like a boss wherever he goes; his suits are matched by color (a classic way to look good) or fabric (he also loves mixing textures).

His suits don’t always match perfectly because of the red tint over his lenses; it’s an effective style statement that makes him look more confident than ever. It matches both his character and the movies’ personalities, which means that every time you see him wearing his regular clothes, he’s probably about to save the world.

Tony Stark isn’t always in his Iron Man suit; sometimes, he likes to dress up as a billionaire playboy philanthropist who knows how to have fun at parties.

Manly-Style Inspiration: Always look good no matter what you’re doing, whether saving lives or being social.

A former hitman who loses everything after walking away from his job, John Wick blows away the bad guys who killed his puppy and stole his car. He embarks on one epic manhunt after another to get revenge for the death of his beloved pet.

Along the way, he picks up a cute little dog (so he can replace the one he lost) and learns how to style himself properly so that no matter where he goes or what kind of trouble he gets into – he looks good doing it. He even wears a suit of armor instead of his regular leather jacket.

Manly-Style Inspiration: Don’t let the death of a pet keep you down – dress up and look sharp instead.

Wolverine is an indestructible mutant who can heal from any wound that doesn’t kill him, so why does he bother wearing clothes at all?

Because he knows how to be discreet when needed; Wolverine knows what looks good on him and uses it to his advantage because he’s always confident in anything he chooses to wear.

Even though his outfits usually are dark in color, they still manage to stand out against the rest of the crowd because they’re just that cool. The only thing Wolverine loves more than his claws is his sunglasses, and they’re always resting on top of his head when he’s not using them to slice things in half.

Manly-Style Inspiration: You don’t need something crazy to look good; stick with what works, and you’ll always look good doing it.

Agent 47 is an elite hitman who makes murder look classy & clean even when it’s messy.

He has his signature red tie to show that he always gets the job done and watches everyone around him die without a single drop of blood marring his immaculate appearance.

Manly-Style Inspiration: If you’re going to kill people, at least keep your clothes clean while doing it.

Ruthless criminal or not, Snake Plissken will always look cool as hell no matter what happens to him. He’s a man on a mission who doesn’t care about anything but finding a way out of this prison where he’s been exiled, and he’ll do whatever it takes to escape with his life.

His dark clothing matches the movie’s tone perfectly; there isn’t much he can do inside the city walls except find ways past them, so by contrast – it makes him stand out more than anyone else in the movie.

After escaping the debilitated prison, he finds himself in an even worse situation when he realizes that there isn’t any way out of this city at all, not one that will get him back to the outside world alive anyway. So he takes matters into his own hands, unlike anyone else in the movie does, and does what needs to be done for him to leave this hellhole called New York City, no matter how many bullets or explosions it takes.

Manly-Style Inspiration: If you’re going to go through hell, do it with style. Make sure you arrive looking just as cool as you did when you left.

Leonidas was the king of Sparta who led 300 men to an inevitable death to protect his city-state from the Persian army.

He trained his men to be strong by using free weights, running, wrestling, and practicing boxing against other Spartans.

His clothes are pretty simple yet effective; he wears a leather kilt that can protect him from both blades & arrows, along with sandals that will provide better grip than regular footwear would.

He’s not much of a talker or anything – but once he enters into battle, everyone else opens up the line of dialogue as they start saying things like “this is Sparta,” “come at me bro,” & “we’re going to win this fight.”

A shirtless king who doesn’t care about what you have to say? Manly enough for me.

Manly-Style Inspiration: Less is more. Don’t talk on your cell phone while you walk down the street or drive around town with Bluetooth attached to your ear. Suit up next time & be the hero they need on the battlefield, not in their everyday lives.

Finally, we have the hacker who went against everything he ever knew when he tried to fight the system. He’s decked out in black, which is a much better color choice than all of those people in gray suits wearing sunglasses indoors because they are too cool for you.

The clothes are tight enough for us to notice his body looks like but loose enough that he can still move freely without getting caught up on anything or risking it coming off while fighting Agent Smith & co.

He’s agile and knows how to handle himself in sticky situations where everyone else just runs away from it all. There aren’t many things that Neo cannot do… even save humanity itself.

Manly-Style Inspiration: If you’re going to fight for the fate of the world, don’t do it with an untucked shirt that’s slipping out of your pants.

When it comes down to it, these are all excellent examples of what manliness looks like because they’re just doing their own thing without caring about what others think.

They don’t let their clothes define them but rather their actions, and that’s the way it’s meant to be.

Be confident enough in yourself to know that there’s more than one good reason for you to be alive, and if somebody doesn’t see that, then they aren’t worth your time anyway.