10 Ways to Turn Your Biggest Failures into Life Lessons 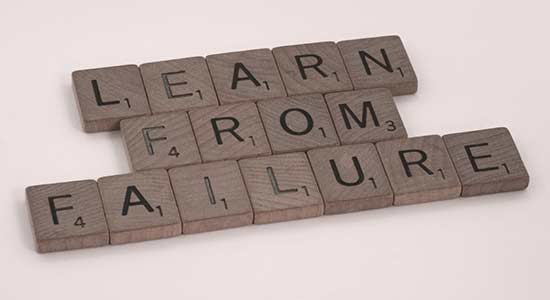 No one is immune to failure. At some point, we all face disappointment, heartache, and defeat. What separates the successful from the unsuccessful is how they deal with these failures.

Do they let them define them, or do they use them as fuel to drive them forward? The latter is obviously the better option, but it’s not always easy to see failures in that light.

Here are 10 ways to turn your biggest failures into life lessons.

Contents show
1 Ask, “why?”
2 Ask, “what’s next?”
3 Change your perspective.
4 Don’t be afraid of failure.
5 Focus on the positive.
6 Learn from your mistakes.
7 Use your failure as motivation.
8 Embrace your inner resilience.
9 Make it about the process, not the result.
10 Be willing to fail again.
11 Conclusion.
12 Author
12.1 Related Posts:

Why did that happen? What could I have done differently? These are questions we should ask ourselves whenever we make a mistake or face a setback. Why? Because they help us identify the core of the problem and figure out how to fix it.

Take your learning one step further by asking why you made the choices you did. For example, maybe you made a costly decision because you were under immense pressure at work. Perhaps you neglected some of your responsibilities at home because you were distracted by a new project.

Maybe you missed the mark on a promotion because you were too focused on short-term results rather than long-term goals.

The answers to these questions are often what lead us to success. By understanding our motivations, we can learn to make better decisions in the future.

Failure often creates a sense of paralysis. What should I do? How can I fix this? These are great questions to ask yourself after a failure.

But the key to moving forward is asking, “what’s next?” This is the moment where you separate yourself from failure. If you have the next step in mind, you can actually start building momentum towards achieving your goals.

It’s also important to remember that not every failure requires a great next step. Sometimes, the best thing you can do is simply take one small step at a time. The important thing is that you keep moving forward.

It’s easy to get caught up in the moment and believe that our failures are the end of the world. But the truth is, they’re often not as bad as we make them out to be.

One way to change your perspective is to think about how your failure will look in the future. For example, let’s say you didn’t get the desired job. Is that such a big deal in the grand scheme of things? Of course, it might feel like a big deal at the moment. But in a year or even a month, you will likely not even remember why you were so upset about it. You’ll probably be too busy working at the job you eventually landed.

Another way to change your perspective is to think about how someone else would view your failure. For example, if your child came home from school and told you they didn’t get the lead in the play, would you tell them it was the end of the world? Of course not. You would likely tell them that it’s not a big deal and that there are other opportunities for them to shine.

So why not give yourself the same advice? The next time you’re feeling down about a failure, try to think about it from someone else’s perspective. It might just help you see things in a new light.

Don’t be afraid of failure.

One of the biggest obstacles to overcome after a failure is fear. We’re afraid of what people will think, we’re scared of being ridiculed, and we’re fearful of not being good enough.

But the truth is, failure is nothing to be afraid of. In fact, it’s essential to success. How can you achieve your goals if you’re not willing to fail along the way?

The key is to view failure as an opportunity to learn and grow. When you make a mistake, don’t beat yourself up. Just take a deep breath and ask yourself what you can do to improve the situation.

Also, don’t be afraid to ask for help. When we’re feeling lost, it’s often because we’re trying to go it alone. But there’s no shame in admitting that you need some assistance. Asking for help is a sign of strength, not weakness.

Finally, don’t forget that everyone experiences failure at some point. Even the most successful people in the world have had their share of setbacks. The difference is that they’ve learned how to use failure to their advantage.

Focus on the positive.

The key is to focus on these positive aspects and use them to your advantage. By doing so, you’ll be able to see failure as a stepping stone instead of a roadblock.

It’s also important to remember that even though you might not have achieved your immediate goal, you’re still one step closer to achieving your long-term goal.

For example, let’s say your goal is to become a doctor. But you didn’t get into medical school the first time you applied. It would be easy to give up and assume that your dream is out of reach. But if you view this failure as a learning opportunity, you’ll be one step closer to achieving your goal.

Because now, you know what it takes to get into medical school, and you can use this knowledge to help you in the future.

So don’t dwell on your failures. Instead, focus on the positive aspects, and use them to help you achieve your goals.

Learn from your mistakes.

One of the best ways to overcome failure is to learn from your mistakes. When you make a mistake, ask yourself how to prevent it from happening again.

For example, let’s say you didn’t get the job you wanted because you didn’t do well in the interview. In this case, you might want to spend some time practicing your interviewing skills.

Or, let’s say you didn’t get the promotion you wanted because your boss thought you weren’t ready for it. In this case, you might want to work on developing your skills and knowledge to be better prepared next time.

The key is to take responsibility for your mistakes and use them as an opportunity to learn and grow.

Also, don’t be afraid to ask for feedback from others. This can be tough, but it’s essential if you want to improve. When you’re asking for feedback, be sure to stay positive and open-minded. Remember, the goal is to learn from your mistakes to be successful in the future.

Use your failure as motivation.

In the first case, we tend to feel discouraged or worried when things don’t go our way. We are motivated to avoid these feelings of negativity, so we avoid taking action.

But if we are truly motivated by drive, we will seek out these difficult situations to learn something and become better people for it.

On the other hand, if you’re already motivated by drive, use your failure as fuel for your fire. Let it push you to work harder and be more determined to succeed.

No matter what, always remember that failure is only temporary. It’s not permanent, and it doesn’t define you as a person. If you want to achieve your goals, you must keep moving forward.

An old saying goes, “What doesn’t kill you makes you stronger.” And there’s a lot of truth to this.

When we face difficult situations, we have the opportunity to develop our inner resilience. This is the ability to bounce back after facing adversity.

In other words, difficulties will make us stronger if we let them. So instead of avoiding difficult situations, embrace them. The more you challenge yourself, the more resilient you will become.

Of course, this doesn’t mean you should go out of your way to put yourself in difficult situations. But it does mean that you should view challenges as opportunities to grow instead of something to be avoided. Having this mindset will help you to develop the inner resilience you need to be successful.

Make it about the process, not the result.

When we focus too much on the result, it’s easy to get discouraged when things don’t go our way.

For example, let’s say you’re trying to lose weight. If your only goal is to lose 20 pounds, then you might be tempted to give up if you only lose 10 pounds after two months.

But if your goal is to develop healthy habits, you’re more likely to stick with it even if the scale doesn’t move as quickly as you’d like.

The same principle applies to any goal you’re trying to achieve. When you focus on the process instead of the result, you’re more likely to stay motivated and see success in the long run.

So instead of fixating on the outcome, you want to achieve, focus on the steps you need to take to get there. Focus on the big picture and the process, not the immediate results.

Be willing to fail again.

Once you’ve learned from your mistakes, you must be willing to fail again. This may seem counterintuitive, but it’s essential if you want to achieve success. Why? Because only by taking risks can we achieve great things. And if we’re not willing to fail, then we’re not really taking risks.

So if you’re feeling down about a recent failure, remind yourself that it’s only temporary. Use it as motivation to take risks and achieve your goals.

Failure is a part of life. But it doesn’t have to be a roadblock to success. If you view failure in a positive light, then you can use it to help you achieve your goals.

So don’t be afraid to put yourself out there again. Take the lessons you’ve learned and use them to make the next attempt even better. Remember, it’s not about avoiding failure; it’s about learning from it.

Let your failures strengthen you, pushing you closer to the success you deserve.

Do you have any tips for dealing with failure? Share your thoughts in the comments below!